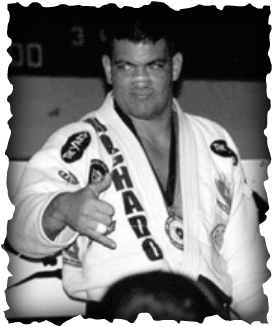 Master Rigan Machado is a living legend in the world of Brazilian Jiu-Jitsu and is
considered by many to be the greatest grappler to ever walk the face of the planet.
Master Rigan holds the prestigious Red and White Belt and is nephew of the Legendary
Grandmaster Carlos Gracie. Master Rigan  Machado achieved his legendary stature
at the world championship level  by amassing a record like never been seen again.

From the age of 14 through 21, he won the World Championships every year and
every belt division. He amassed a record of 365 wins and no losses in Brazilian Jiu-Jitsu
competition. He also created a record by having 19 matches in one day and finishing all
of them by submission.  He has also competed and won in other styles of grappling such
as Sambo in which he took 2nd place in the World Championships.

He remains unbeaten in Brazilian Jiu-Jitsu in more than 13 years of competition.
Master Rigan Machado is  one of the most unique and interesting people in the martial
of Brazilian Jiu-Jitsu because of the desire he has to bring the best out of all his students.
He has taken pride in the fact that he will  always be a student of the art and he will
always make sure that his  students receive the best from him at all time.